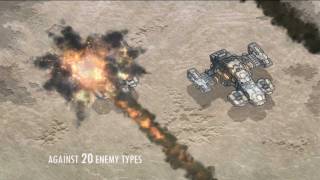 Colony Defender is an isometric shooter with strategy elements. The main challenge is to defend your mining colonies on various planets against enemy units.

The gameplay includes three planets (volcanic, desert, arctic), each of them is divided into 16 missions (of total 48). You must defend your base against enemy units but often you will face other tasks.

Between missions you can be promoted to a higher ranks and get credits which allow you to unlock sixteen technologies like walls, towers, weapons and satellites and test six secret weapons. You have two economic technologies too.

Walls - these technologies allow you to upgrade your walls. Each of them can absorb attack from specific ground units.
Towers - each of them has various parameters such as range, rate of fire, damage or armor. Additionally, each of them has special skills.
Weapons - Every weapon has its own abilities and weak points.
Satellites - they can be activated during a battle and every satellite covers the whole battlefield. Their main purpose is not to destroy enemies, but support us during the battle.

During missions you will have to handle with various types of enemies such as ground units - truck, scout and tank and flying units - drone, jet and cruiser. Additionally, you can divide those units by their abilities.

Normal - those units do not have any special properties.
Explosive - those units cause additional damage on the wider area, especially against your walls.
Teleport - when attacked those units can teleport themselves into different place.
Armored - those units are almost immune to most weapons.
Stealth - invisible units which can be revealed only by few devices.

Esta aplicación ya no está disponible